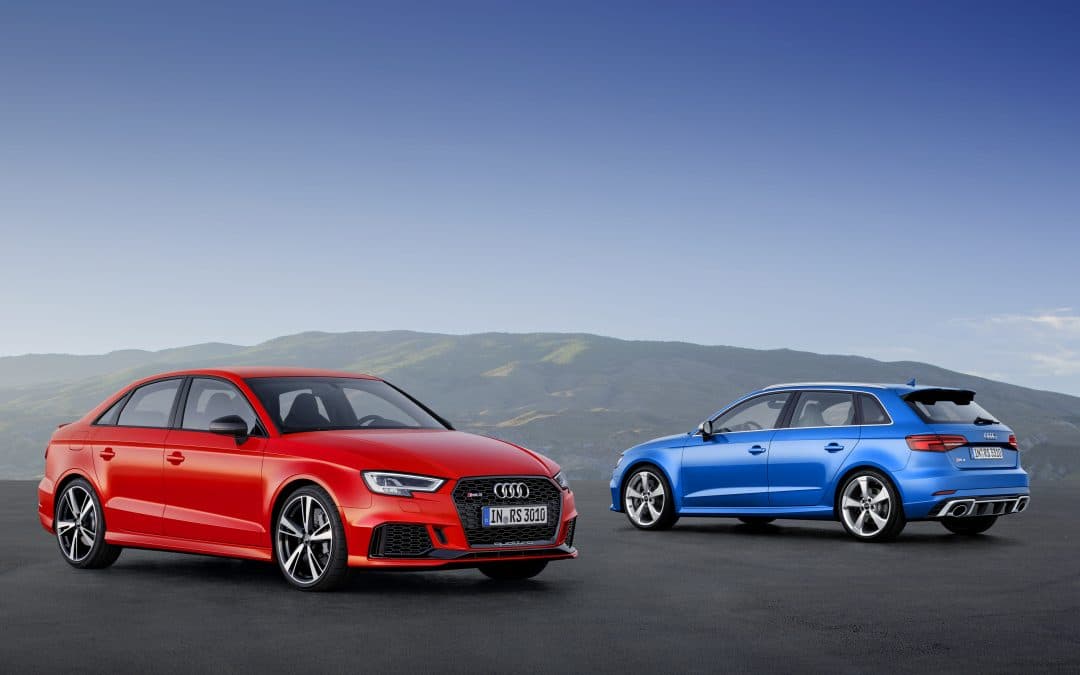 Audi has revealed that the Audi RS 3 Sedan is now available in South Africa, with the RS 3 Sportback following closely behind in November 2017. Both versions boast high-tech suspension, a new five-cylinder engine and a sharper look.

According to the German car maker, five-cylinder engines are a great tradition at Audi. In the 1980s they made a decisive contribution to furthering the success of the brand both in motor sports and on the road. After a break of many years, they made a comeback in 2009 when the 2.5 TFSI was fitted in the Audi TT RS. In 2011, the first generation of the RS 3 Sportback followed, in 2013 the RS Q3 and in 2015 the second edition of the RS 3 Sportback. It is now joined by the new RS 3 Sedan with which the brand is expanding its offering at an international level.

It is the first compact Audi Sedan to bear the RS label as well as being the first to feature a transversely-mounted five-cylinder engine. The pioneer of this design was the Audi A3 clubsport quattro concept study from 2014. “The five-cylinder engine is a legendary element of our company’s DNA,” says Stephan Winkelmann, Managing Director of Audi Sport GmbH. “Now, with 294 kW, it will take up pole position worldwide – and not only in the RS 3 Sportback but also in the RS 3 Sedan. Both models will offer our customers an attractive entry into the RS world.”

The Audi RS 3 Sportback has enjoyed a successful history in South Africa. The first generation redefined the segment, having been produced in limited numbers for global distribution, Audi South Africa managed to obtain and deliver 174 of those units in the local market. It was followed by the second generation in 2015 and sold 265 units.

Since 2010, the 2.5 TFSI has been voted “International Engine of the Year” in its class for seven consecutive years. Now, Audi presents a new version of the successful power unit. The turbo engine which drives the new RS 3 Sedan and Sportback is the most powerful series-production five-cylinder engine on the world market.

An output of 294 kW results to an increase of 24 kW versus the previous model RS3 Sportback. With the displacement of 2,480 cm3 remaining unchanged, its maximum torque of 480 Nm  is available at engine speeds as low as 1,700 rpm and remains constant up to 5,850 rpm. The five-cylinder engine thus catapults both the RS3 Sedan and Sportback from zero to 100 km/h in 4.1 seconds . On request, Audi can increase the electronically limited top speed from 250 km/h to 280 km/h. The new five-cylinder engine is 26 kilograms lighter than its predecessor which is of considerable advantage to the RS models with regard to the axle load distribution and gross weight. The curb weight of the RS 3 Sedan weighs 1,515 kilograms, while the RS 3 Sportback weighs in at 1,510 kilograms. Elaborate measures on the 2.5 TFSI reduce internal friction while at the same time increasing power output. Its crankcase was changed from compacted graphite iron to aluminum. The cylinder barrels are plasma-coated; the crankshaft main bearings are six millimetres smaller in diameter. The crankshaft is hollow bored and is therefore 1 kg lighter, while the aluminum pistons have integrated channels for oil cooling.

The start-stop and recuperation systems also contribute towards improving efficiency. In the NEDC cycle, the both models consumed 8.3 litres of fuel per 100km.

Unique: the sound of the five-cylinder engine

The 2.5 TFSI has a firing interval of 144 degrees. Because of the 1-2-4-5-3 ignition sequence, the ignition alternates between directly adjacent cylinders and those further apart from one another. This brings with it a very special rhythm. The basic tone is accompanied by characteristic harmonic frequencies. The engine control unit also contributes indirectly to the unmistakable sound. At high load, the flaps in the exhaust system open for an even fuller sound. Using Audi drive select, the driver can control the opening and closing of the flaps individually. The standard Audi RS Sports Exaust system sharpens the characteristic five-cylinder sound further.

The seven-speed S tronic is standard on both RS 3 models. The lower gears of the compact dual-clutch transmission are dynamically short whilst the seventh gear has a long ratio to reduce fuel consumption. The driver can let the seven-speed S tronic operate automatically or can change gear themselves using the selector lever or the steering wheel paddles. There is also a choice of two driving programs in automatic mode. In D mode, the engine is optimized for everyday traffic. In S mode, the engine is designed for more agility and the revs are higher. Gears are shifted almost imperceptibly within hundredths of a second.

The quattro permanent all-wheel drive combines gripping dynamism with considerable stability. Its central component is the electronically controlled, hydraulically activated multi-plate clutch, which is mounted at the rear axle for reasons of axle load distribution. The multi-plate clutch uses software that is tailored specifically to the RS 3. It distributes the drive torque extremely quickly to the front and rear axle as required. Depending on the driving style and coefficient of friction, between 50 and 100 percent of the available drive force can be sent to the rear axle. An electrically driven pump presses the plates in the clutch together with a maximum oil pressure of 40 bar. As soon as the grip on the road is reduced or the driver adopts a more sporty driving style, the clutch can direct some of the drive force to the rear axle when turning into the corner.

In addition to the quattro drive, Audi drive select affects the operation of the gas pedal, S tronic, steering assistance and the exhaust flaps. Furthermore, it includes the optional RS sport suspension plus with adaptive damper control (Audi magnetic ride). In conjunction with Audi drive select, it uses a special hydrocarbon oil with microscopic magnetic particles and a magnetic field to vary damping in the stages auto, comfort and dynamic. In the dynamic mode, the system enables a more spontaneous steering response and more agile handling. The wheels are precisely braced during cornering and body roll is largely suppressed. Audi magnetic ride counters body pitch during braking.

The internally ventilated, perforated steel discs on the front axle are 370 millimetres in diameter. The eight-piston brake calipers with RS logos are painted in black – or optionally in red. As an alternative on the front axle, Audi can supply carbon ceramic brake discs with gray calipers. At the rear axle there are brake discs with a diameter of 310 millimetres and floating brake calipers. The sporty character of the RS 3 Sedanand RS 3 Sportback  is visible at first glance: the front, sides and rear boast new, striking design details. The Singleframe is more sculpted than before. Its black gloss, three-dimensional honeycomb grill and the quattro logo on the sloping lower segment accentuate the vehicle’s dynamism. A frame with a matte aluminum look further emphasizes the grill. The newly designed blade in the bumper is also particularly noticeable. It turns up at the ends, forming narrow, upright funnels at the same height as the side air inlets, which also feature the same honeycomb structure. This makes the front appear wider still. The housing of the exterior mirrors on both RS models has a matte aluminum look.

The headlights, also sporting a new design, stand out thanks to their jagged lower edge. They form a striking light graphic. LED units are standard and Audi also optionally offers precision-controlled Matrix LED headlights. 15 precisely controllable LEDs on each side shine through three reflectors to generate the high beam. Based on information from the camera mounted on the interior mirror, the control unit switches the LEDs on and off individually and can also dim them in 64 stages, as necessary. As a result, the Matrix LED headlights can produce several million light distribution variations.

At the rear, the RS3 Sedan demonstrates their power with a distinctive diffuser insert divided by vertically running struts. The large elliptic tailpipes of the RS sports exhaust system round it out on either side. Whilst the sculpted rear of the Sportback is dominated by a distinctive RS roof edge spoiler, the sculpted rear of the Sedan is characterised by the RS-specific spoiler lip on the trunk lid which improves the break-away of the air flow. Both models are available in eight colors, including the RS-specific tones Nardo Grey and Catalunya Red. 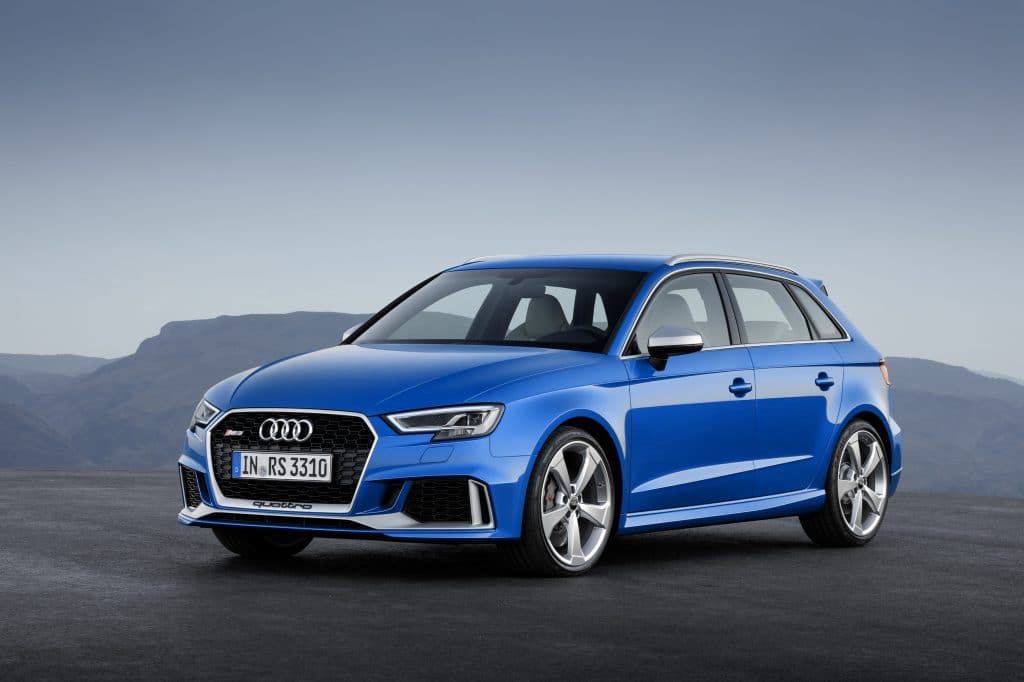 Distinctive lines, clear ergonomics and high-quality craftsmanship – the dark-toned interior of the compact RS models captivates with an atmosphere of cultivated dynamism. It welcomes the driver and passengers with illuminated door sills bearing the RS 3 logos as a standard feature. Technical materials underline the cool, sporty character whilst soft surfaces provide for noblesse. The Sedan is equipped at with sport seats in black Fine Nappa leather, with contrast stitching in gray or red creating a visual highlight. Alternatively, RS sport seats with sharply contoured side bolsters and integrated head restraints are also available. Their covers are quilted in a diamond pattern and colour-perforated.

Also available on the RS3 is the optional Audi virtual cockpit, optimised to the RS model by shifting the rev counter to the centre. The optional RS design package emphasizes the air vents with red accent rings and creates further visual highlights using contrast stitching. The door trim inserts are made of Alcantara whilst the pedals and footrest are in stainless steel.

The flat hierarchies and intelligently linked context menus make operation of the RS 3 Sedan intuitive and ergonomic. The driver can reach often used functions in only a few steps. The main control element is the round rotary/push-button control on the console of the center tunnel which also has an additional joystick function in conjunction with the MMI navigation. It is used for changing between the individual menus. In the case of MMI navigation plus with MMI touch, the surface of the rotary/push-button control features a touchpad.

Optionally available in combination with the MMI Navigation Plus is also the Audi smartphone interface, which integrates selected apps into the car using Android Auto and Apple CarPlay. This includes, amongst other things, applications for telephone and streaming services which appear in a separate MMI menu. The following equipment will be offered on the Audi RS 3 Sedan and RS 3 Sportback as standard:

The Audi RS3 range will be priced as follows, standard with the five year or 100 000 km Audi Freeway Plan and inclusive of all taxes:

The Audi RS3 Sedan is now available at all Audi Sport dealers in South Africa. The RS 3 Sportback will be introduced locally in November.