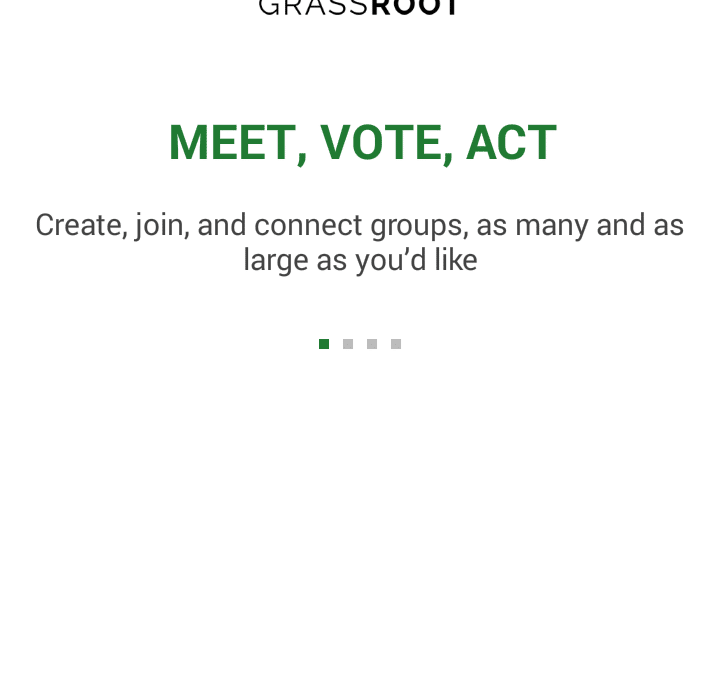 Q and A interview with Luke Jordan, Co-Founder of Grassroot

Your NGO’s goal is to enable participatory democracy or the broad participation of all South Africans in the direction and operation of government. That is pretty ambitious, how is technology in general and AWS cloud specifically allowing you to enact that aim into reality?

Grassroot is an NGO enabling communities on the ground to effect participatory democracy by providing them with the technology to organise themselves. In other words, the platform allows us to do two things: (1) focus very hard on our users and their problems in organizing themselves and taking action and participating, because we don’t have to focus on maintaining servers or infrastructure, we can just identify problems, write the code that we think helps address them, and deploy the code to the cloud, then do the cycle again, and (2) it allows us to bring cutting edge technology, such as auto-scaling serverless functions or machine learning and graph databases, to our users simply and quickly, with a small team of only 3 people and on a low budget.

We were founded in late 2015 and have to date reached over half a million people. As well as working with communities on the ground, we also provide other NGOs and partners the ability to reach audiences otherwise left out of the national conversation. For example, we helped the Big Debate run polls during its shows this season over USSD, allowing people not on social media to have their opinion counted. Additionally we worked with Health-E News to provide information on local clinics and support services to survivors of gender based violence who might not have smartphones or data.

Our set of simple tools, available through any type of phone, allows community members to interact with government, organisations or even other stakeholders. This includes factors such as the arrangement of large scale meetings, identification of volunteers and even taking community votes.

In order to manage this workload, Grassroot was born in the AWS cloud. At the core of the application is Amazon EC2 and Amazon RDS stack providing the necessary storage power. Increasingly over the last year, they have also been moving over to fully managed and serverless services. To do this they use AWS Lambda and Amazon Dynamo DB.

Isn’t enterprise-level technology such as AWS cloud services only accessible/affordable for big corporates?

Not at all. As in my point (2) above, AWS allows the smallest team to get started with robust, secure and up to date technology. In fact it’s easier for us to access the technology, we hit a button on the AWS console and our database engine (as an example) is immediately brought up to the very latest versions

What precipitated the need for this goal/ What led to the formation of Grassroot?

Grassroot was formed with the intention to allow communities to mobilize and assemble on important community matters. When ordinary people are able to participate regularly and actively, and that such participation requires people being able to act together, so, in the words of a classic book, “the science of association is the mother of all sciences, on its progress depends that of all the rest”, and (b) that community organizing depends on a lot of routine drudge work that is simple to do when you have high end technology and good connectivity, but very difficult to almost impossible when you have a low end phone and little to no data. Beyond mobility and cloud computing, what other trends do you tap into? How are you doing so?

We’re also using natural language processing (we have been from the start) and looking to build for conversational interfaces. For those we use a mix of open source frameworks that we customize and deploy on AWS cloud. We also run a modern web application on Amazon Web Services, built on open source frameworks and tools (Java/Spring, Postgres, etc.).

Digital transformation enables companies to make their processes more effective and cost-effective and enables small firms to take on big competitors, but what benefits does it have for NGOs and non-profits?

Funding is pretty scarce for non-profits, especially if tackling long-term changes in governance, and our funds are donated by people or institutions who believe in our mission. We have both a duty and a necessity to use those funds as efficiently as possible. Also, the problems we try to address are urgent – we are talking about communities with no sanitation, for example.

As your organisation goes from strength to strength and grows, to what end is the technological backbone including AWS able to support that growth?

When demand grows, we increase our server size. That’s particularly the case with serverless technology, which is what we increasingly build for – then we don’t even worry about the number of cloud servers, that’s one of the reasons we are using AWS.